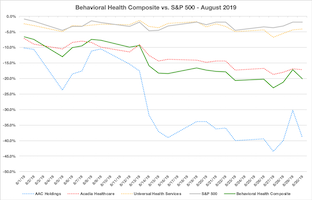 Behavioral Healthcare Stocks down 20.1% in August

The Behavioral Health Composite, which tracks investor interest in the three public behavioral healthcare companies – Acadia Healthcare (ACHC), American Addiction Centers (AAC), and Universal Health Services (UHS) –was down 20.1% for the month. The S&P 500, by comparison, was down 1.8% during the same period.

The BHC index declined resulting from:

[fusion_dropcap color=”” boxed=”no” boxed_radius=”50%” class=”” id=””]B[/fusion_dropcap]elow are the Enterprise Value / EBITDA and Enterprise Value / Revenue ratios for AAC, ACHC and UHS. The valuations provide a relative barometer for what smaller companies can expect.  Given the higher relative risk of smaller companies (e.g., less liquidity, smaller revenue base), we typically (though not always) see multiples that are lower than those of the public companies.

August 5, 2019 –  Kadiant, an organization that provides high-quality Applied Behavior Analysis (ABA) therapy and other services to individuals diagnosed with autism spectrum disorder (ASD), announced that it has partnered with Behavioral Education for Children with Autism (BECA), a provider of ABA services in centers and school-based settings. BECA is the fifth ABA practice to join Kadiant since its founding in early 2019. BECA was founded in 2001 by Dr. Tracy Guiou to meet the growing need for behavior analytic services in Southern California. This partnership expands Kadiant’s services into Southern California for the first time.

August 5, 2019 –  Formation Capital and Safanad Limited announced the sale of their portfolio company, RHA Health Services LLC to Blue Wolf Capital. RHA is a comprehensive provider of services to individuals with intellectual and developmental disabilities (I/DD), behavioral health needs and substance use challenges. RHA has operations in Georgia, Florida, North Carolina and Tennessee, serving 25,000 people each year across 440+ locations.