Behavioral Healthcare Stocks Finish Down – 36% for the Year

2018 was a turbulent year for the Behavioral Health Composite, up nearly 25% through March, only to fall in the last quarter — down 36% for the year.  “It was a rough year for the behavioral health stocks, especially AAC and Acadia. Both companies have taken significant measures to change course.  I won’t be surprised to see more significant restructuring in 2019,” said Cory Mertz, Managing Partner with Mertz Taggart.

April.  ACHC fell on news of a class action lawsuit filed on behalf of ACHC investors that purchased stock between Feb’17 and Oct’17.  The lawsuit alleges that ACHC failed to disclose material information during this period.  On this news, the price of Acadia’s shares plummeted 26% to close.

May.   ACHC rebounded somewhat, on strong Q1 2018 earnings release.  ACHC reported Q1 2018 adjusted earnings of 52 cents per share, which beat the consensus estimates and prior year.

October.  ACHC increased on a rollercoaster October after a down month in September.  The stock rose nicely – 10% during the first few days of the month until, on October 9th, the law firm of Levi and Korsinsky announced a class action lawsuit against the company. The suit alleges ACHC knowingly issued misleading statements about the quality of its then-recently-acquired UK operations and, while the stock was artificially inflated, the CEO and President collectively unloaded $35 million in company shares.  The stock plunged over the next few trading days after the announcement.  On October 18, Reuters reported that Acadia had been approached by private equity powerhouses KKR and TPG Global about selling itself. The buyout talks continue to underscore the interest by private equity firms in the sector.

December.  ACHC had a rough December.  In addition to general market declines, the company was affected by the following:

February / March.   ACHC rose sharply in late February and March due to both (i) positive Q4 2017 earnings release, with a 125% positive surprise of earnings per share vs. consensus estimates and (ii) the announcement on March 1 of the completion of its acquisition of AdCare for $85 million. The transaction was also accretive. AAC was trading at approximately 11x AEBITDA as of the date of the closing, while paying 10x for AdCare’s $8.5 million in AEBITDA. AAC management has also identified approximately $3.9 million in total synergies over the next 12 months, bringing its pro-forma multiple down to an attractive 6.9x.

August / September.  AAC decreased sharply based on disappointing earnings release for Q2’18.  Despite strong revenue growth, Q2’18 adjusted earnings per share of $0.09 was 50% lower than estimates of $0.18 and lower than prior year of $0.26.

October.  AAC continued its slide.  Analysts had become nervous for two reasons: 1) very disappointing Q2 earnings, missing consensus estimates by 50%; 2) spurring uncertainty about what AACs future business will look like after a substantial makeover in both operations and marketing.  On October 16, Raymond James lowered its price target for AAC.  Zacks Research then downgraded the stock from HOLD to SELL on October 17.

November / December.  AAC declined very sharply in November and December due to the following:

July – September.  UHS rose steadily on its strong Q2’18 earnings release, reported at the end of July.  In addition, on July 31st, UHS announced the acquisition of The Danshell Group (“Danshell”) through its UK subsidiary Cygnet Health Care. Danshell owns and operates 25 facilities with a total of 288 beds in the UK.  The Danshell facilities support and care for adults living with learning disabilities, who may also have a diagnosis of autism, in specialist supported living, residential services and hospitals. Through this acquisition, the company expands into new service lines and new geographical areas, complementary to the existing UK portfolio.

October. UHS declined slightly through the month on lowered outlook for the balance of the year.  On October 26, UHS delivered Q3’18 results, which were generally positive.  Revenue lagged estimates by 1.2% but beat prior year by 4.2%.  However, EPS beat prior year by 36% and estimates by 11.5%, but it was not enough to overcome the somewhat more pessimistic outlook. 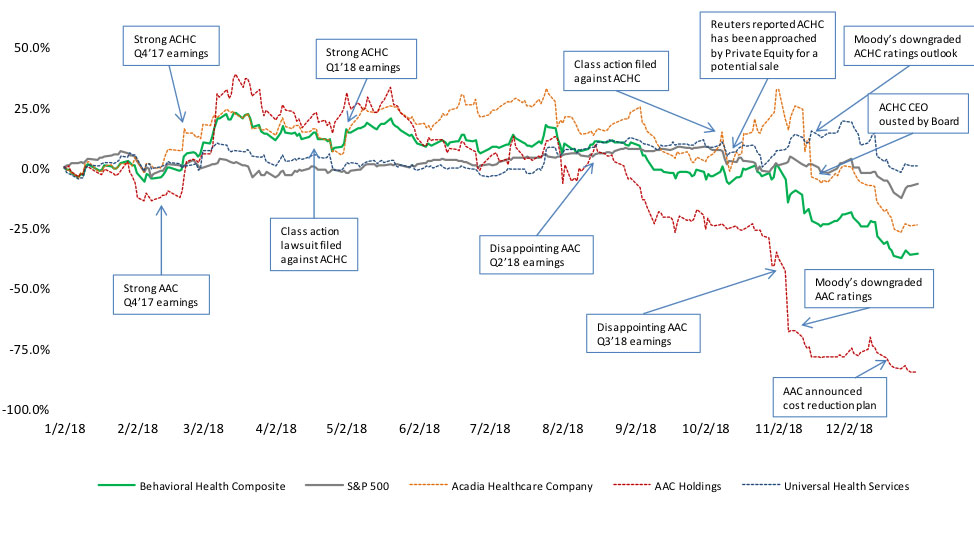 December 5, 2018 – Chicago-based investment firm Frontenac Co. has agreed to sell its Behavioral Health Group (BHG) to Vistria, another private equity firm in Chicago. The deal is expected to close in 2019.  Behavioral Health Group provides medication-assisted treatment for opioid use disorder at 46 outpatient clinics in 11 states.  Frontenac has invested in BHG for seven years.

November 14, 2018 – Private equity firm WindRose Health Investors announced that it has completed the recapitalization of Traditions Behavioral Health. Based on the West Coast, Traditions provides permanent outsourced inpatient and outpatient psychiatric services to institutional and community-based programs. Traditions manages all aspects of psychiatric staffing for its clients, and with the additional capital, the company said in a news release that it plans to expand into new markets across the country.

Mid November, 2018 – Carlyle Group acquired Odyssey Behavioral Health from Nautic Partners in a deal valued at approximately $200 million.  Odyssey Behavioral Healthcare was formed in 2015 as a partnership between Nautic Partners and healthcare executive Scott Kardenetz.  Odyssey has a diversified platform of behavioral health facilities across the treatment spectrum in psychiatric and addiction care in seven primary facilities located in Tennessee, Florida, Alabama, Indiana, and North Carolina.

November 5, 2018 – FHE Health Group (FHE) announced that it has finalized its acquisition of Treatment Partners of America (“TPA”), an outpatient Substance Use Disorder (“SUD”) treatment provider with facilities in Florida.

November 1, 2018 – Clearview Capital announced the acquisition of Premier Care and Maintenance and Recovery Services (MARS), a pair of medication-assisted treatment providers for patients with opioid use disorder, by its platform portfolio company Community Medical Services.  Premier Care operates seven opioid treatment programs (OTPs) across Ohio, Indiana, Michigan and Wisconsin with an average daily patient census (ADC) of nearly 3,000, while MARS operates four OTPs in Texas with an ADC nearing 800. Combined with CMS, the nationwide platform is now providing treatment to more than 9,300 patients across 28 clinics on a daily basis.