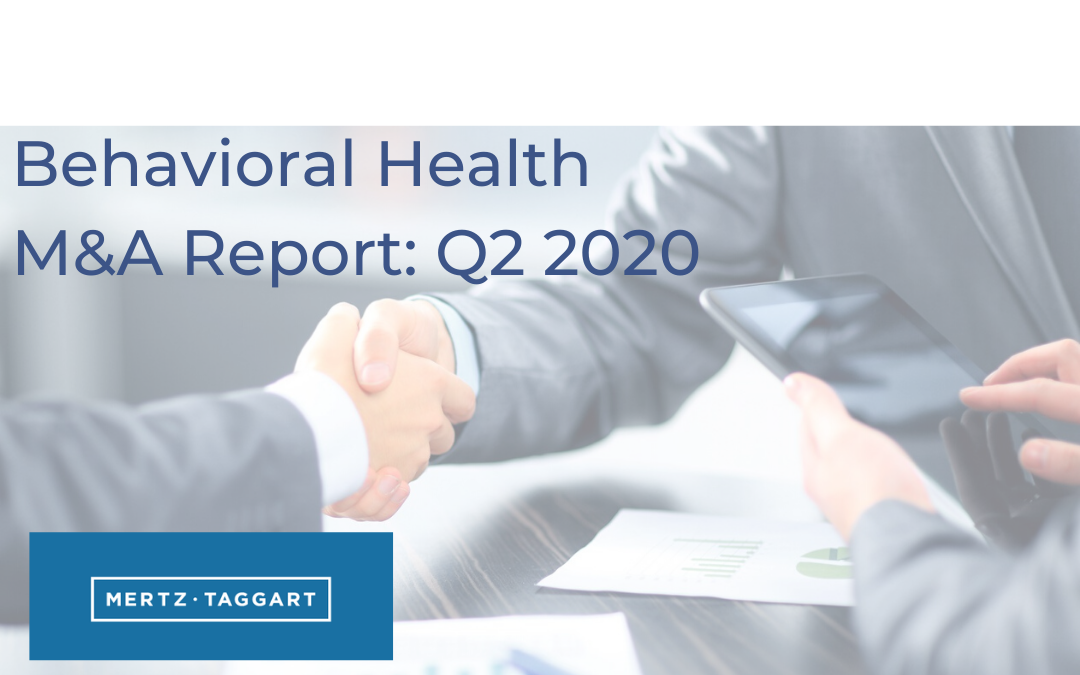 After two quarters, 2020 is proving to be an active year in behavioral health mergers and acquisitions, according to the latest data from M&A advisory firm Mertz Taggart. Deal volume among addiction treatment organizations led the segment in Q2 with 11 announcements, for a total of 18 transactions in behavioral health.

“Overall, the sector held up pretty well,” said Mertz Taggart Managing Partner Kevin Taggart. “While transactions are down a little from the past six quarters or so, the lull isn’t especially significant. We didn’t see any transactions fall apart directly due to COVID-19, but we suspect some deals were quietly pushed back or halted completely amid the chaos in March and April.”

Taggart attributes the fall-off to uncertainty about the effects of coronavirus on the healthcare delivery system at large. However, healthcare M&A ultimately witnessed an uptick of activity in June—likely signaling a resurgence in transactions throughout the remainder of 2020.

“There was a period where banks were panicked. Most of that has passed, but there are still some banks that are not lending or have tightened their requirements,” he said.

Looking back over the past 12 months, behavioral health has averaged nearly 20 deals per quarter, according to Mertz Taggart data. The steady pace is an indicator of investor confidence in the segment. Taggart said that most buyers are still in a growth phase, building their portfolios to achieve scale. And there is plenty of opportunity to do so.

Additionally, he notes that investors are now going to want to examine the fundamental infrastructure for each deal target in greater detail, including any stipulations related to financial relief provided through government support as well as the practical impact the pandemic has had on operations. Increased transparency and legal diligence will be important for them to understand where they might have additional risk.

For example, providers that have established reliable COVID-19 testing for residential, inpatient or partial hospitalization programs will fare better than those that don’t. And organizations that have found recent success in providing telehealth options—with significant patient adoption of the technology—will also have some advantages, knowing that payers are supporting the modality with reimbursement dollars.

Demand for addiction treatment, mental health, and other services remains high, with the prevalence of a number of conditions increasing by double digits since the start of the pandemic, according to data released in May by the Blue Cross Blue Shield Association. The association also found that although nearly half of Americans delayed medical care because of the pandemic, 75% of those with behavioral health conditions continued receiving services. Providers benefitted from fewer patient “no-shows” when telehealth was made available, resulting in revenue for those services.

“Beyond enterprise value, buyers will be taking a closer look at calculations of cash, debt and working capital,” Taggart said.

Anxiety, social isolation, and economic uncertainty seem to be fueling an increase in overdose deaths, according to White House officials. Their analysis shows an 11.4% year-over-year increase in fatalities for the first four months of 2020. Providers will be looking to scale up services to meet new demand.

“Diversity will be key for addiction treatment,” Taggart said. “Being able to reach different markets and provide high-quality services throughout the continuum will be important to create scale.”

Q2 was a busy quarter for BayMark Health Services. In May, its AppleGate Recovery brand announced the acquisition of Medication Assisted Recovery Centers, an outpatient opioid treatment program with two locations near New Orleans, Louisiana. The transaction increases AppleGate’s total network in the state to eight facilities. BayMark has owned AppleGate since 2016. In June, BayMark announced the acquisition of Narcotic Addiction Treatment Agency, which provides medication-assisted treatment in the Greater Los Angeles area. Also in June, BayMark purchased Middlesex Recovery with four clinic locations in Massachusetts. It will continue to operate under the Middlesex Recovery brand. In its third transaction in June, BayMark added Norton HealthCare to its New England network, bringing its number of sites in Massachusetts to five and adding its first in New Hampshire location.

Veronis Suhler Stevenson and NewSpring Health Capital in April announced the completion of an investment in the BRC Recovery Family of Programs in Austin, Texas. The transaction also included the formation of a new holding company, BRC Healthcare. Founded in 2006, the program offers a full continuum of care for addiction treatment, from detox and intensive outpatient to residential treatment and sober living.

Also in April, Yukon Partners announced an investment in Crossroads Treatment Centers, a portfolio company of Revelstoke Capital Partners. Crossroads provides methadone and other outpatient medication-assisted treatment programs. Since the initial Revelstoke investment, which completed in January 2015, Crossroads has grown organically from fewer than 10 locations to more than 90.

“This type of data indicates a greater awareness among health professionals, demonstrating that they’re evaluating patients for an appropriate diagnosis of ASD,” says Taggart. “And that informs the outlook on the overall demand for services.”

The Columbus Organization announced in April the acquisition of Community Support Network, a provider of I/DD support coordination services in Florida. The company serves 140 state and local agencies and school districts in 42 states.

In May,  Acorn Health, a provider of applied behavior analysis (ABA) for children with ASD, announced the acquisition of Behavior Basics, LLC. Acorn operates in four states, and the transaction expands its presence in Virginia.

Bain Capital Double Impact announced a significant investment in Broadstep Behavioral Health, a provider of programs and services for those with I/DD. Broadstep, with 86 centers in five states, aims to use the investment to expand into new markets.

Rethink Autism, a global health technology company, in June acquired TheraWe, a website and HIPAA-compliant app for therapy providers and caregivers of children with intellectual or developmental disabilities.

Referrals from primary care will continue to be key resources for mental health treatment providers. Even though primary care has seen a reduction in face-to-face visits recently, the need for specialty care is well established.

“Having a solid referral network will be attractive to strategic buyers, especially with the recent trend in formal partnerships among local care organizations that seems to be reinforcing stability for specialty providers,” Taggart said.

TPG Capital in April joined existing investors—Summit Partners and Silversmith Capital Partners—in a partnership to support LifeStance Health, which provides outpatient behavioral health services, including telemedicine. LifeStance has 200 care sites, and the deal was assigned a value of $1.2 billion.  LifeStance was formed in 2017 and grew to a $1.2 billion dollar valuation faster than any behavioral health services company in history.

In June, Odyssey Behavioral Healthcare announced a deal to acquire Clearview Treatment Programs in Venice, California. Odyssey provides a continuum of care for mental health and addiction treatment with 21 locations and outpatient services in eight states.