Overall, there were 19 behavioral health transactions in Q3—one of the noticeable valleys on the prevailing 2018/2019 trend line. With a similar low point in Q1, it looks as if 2019 could end as a quieter year. By comparison, 2018 saw nearly 100 deals in the space. 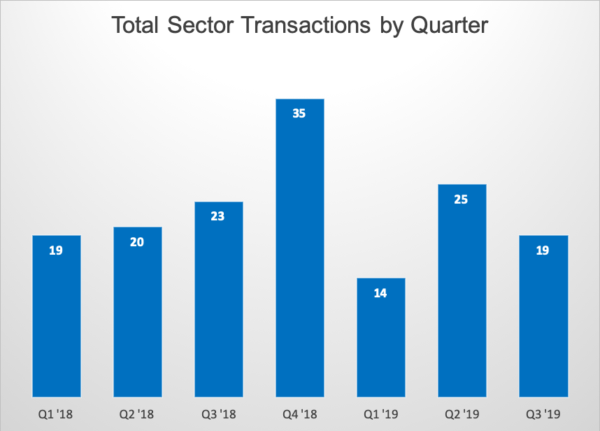 Year-to-date, there have been eight  private equity platform investments in the autism/ABA subsector, according to Taggart. That’s up 60% by comparison to the five  platform transactions through three quarters in 2018.  With lack of a publicly-traded autism services company, and an industry dominated by small providers, private equity will continue to dominate the transaction activity for autism services for the foreseeable future.

“The peak of activity signals a degree of confidence that the providers have the right capabilities to deliver consistent, high-quality care,” Taggart adds. “Many of the buyers will also be eager to make connections with payers as they operationalize care delivery across wider geographic areas.” 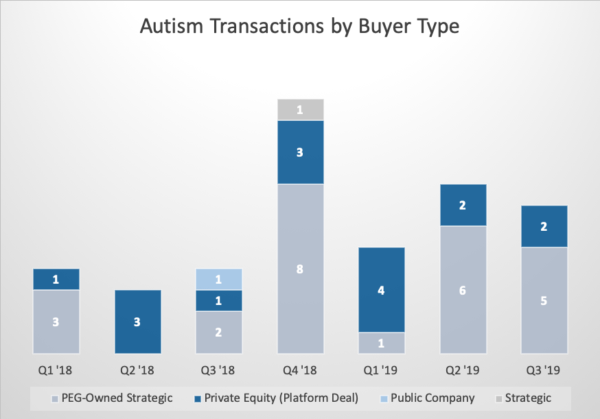 Demand for services that support individuals with intellectual and developmental disabilities (I/DD)—including those on the autism spectrum—continues to flourish. In parallel, more managed care organizations are shepherding service delivery under state Medicaid contracts, resulting in greater need for providers who have sufficient scale. What’s also encouraging for providers is a forecast that suggests added value derived from formal or informal partnerships with related community organizations, which Medicaid programs are potentially seeking to improve overall health status.

“Providers that have solid footholds in their communities will likely be among the key acquisition targets,” Taggart says. 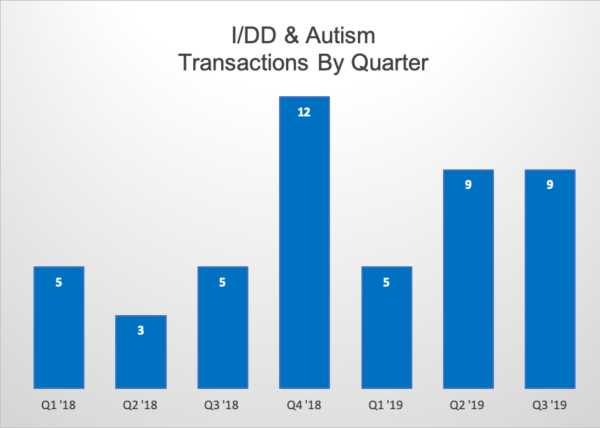 Formation Capital and Safanad Limited announced the sale of the parent company of RHA Health Services, LLC to an affiliate of Blue Wolf Capital. RHA has been a provider of services to individuals with I/DD and behavioral health conditions for 30 years, serving 25,000 clients annually. The company operates 440 locations in four states. Under Formation and Safanad since 2015, RHA doubled its EBITDA and expanded its operations.

In July, Blue Sprig Pediatrics acquired the assets of Thrive Autism Solutions, a multi-state clinic- and home-based provider of ABA therapy services. The deal represents an expansion into Arkansas and Missouri markets, and officials said they plan to invest in research, de novo and acquisition growth in underserved regions in the two states. Blue Sprig was formed by KKR & Co. in January 2018 and has been on an acquisition spree much of this year.

In August, Kadiant struck a deal with Behavioral Education for Children with Autism, which provides ABA services in centers and school-based settings. It was the fifth deal for Kadiant, which arrived as a new player in the market earlier this year, and marks the organization’s first expansion into Southern California.  Kadiant was established as a platform company in February 2009 by TPG Capital and Vida Ventures.  TPG has committed $300 million to the company.

With four transactions for the quarter, mental health remains an active category. Its most recent peak was in Q2 2019, which saw seven deals. Concern over rising youth suicide has captured the attention of regulators, who will likely continue to seek additional program support for prevention and treatment services. In fact, there was a great deal of discussion following a federal report noting the suicide rate among young people climbed 56% between 2007 and 2017.

“Behavioral health has been on a sustained wave of M&A activity for the past several years,” Taggart said. “Scale continues to be the primary focus among private equity investors and strategic buyers alike with a goal to increase long-term value.”

Coastal Behavioral Healthcare in July merged with First Step of Sarasota, Florida, and will operate under the First Step brand. The two nonprofits were frequent referents to one another, with Coastal providing mostly mental health services, and First Step providing mostly addiction treatment and recovery services. The consolidation offers one point of entry for clients, according to company officials. 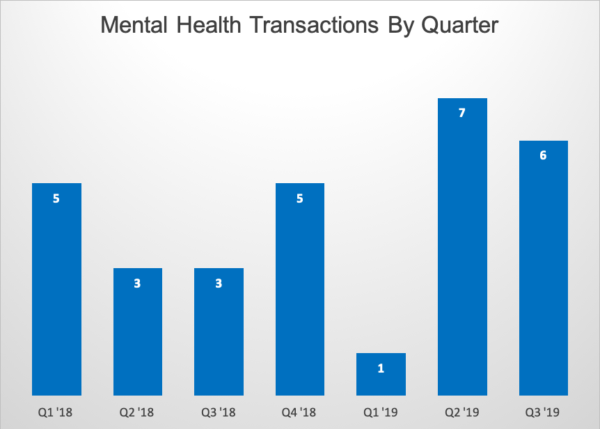 There’s no doubt 2018 was an active year for the addiction treatment category, averaging more than 14 transaction per quarter. So far, 2019 is somewhat slower, averaging 10 deals per quarter, but early indicators point to a possible upswing to round out the year.

“We’re also watching the potential for senior care and skilled nursing players to enter the addiction treatment market,” Taggart said. “There are some similarities in facility design, so repurposing properties would be one way to make an entrance.”

Sierra Tucson, which operates under parent company Acadia Healthcare, has added Sober Living by the Sea and Sunrise Recovery Ranch to its portfolio. As a result of the two California acquisitions, the unit was renamed Sierra Tucson Group. 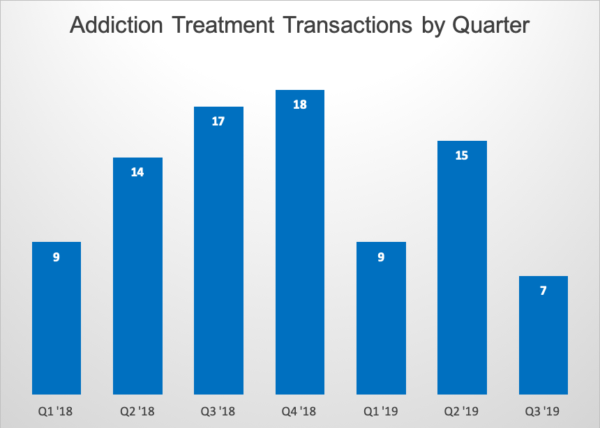