Behavioral health transaction activity regained some momentum in the second quarter of 2019, the latest data from M&A advisory firm Mertz Taggart shows. Each of the specialties bounced back in earnest after a slower Q1, with addiction treatment leading the surge.

Overall, there were 25 behavioral health transactions in Q2—an impressive amount of activity but not quite as active as the fourth quarter of 2018, which posted 34 deals. Two platform deals in the autism category and one in the addiction treatment category round out the quarter.

“We have seen the continuation of noticeable tailwinds driving a positive outlook for behavioral health overall and for addiction treatment in particular,” says Mertz Taggart Managing Partner Kevin Taggart. “What has made several of the addiction targets especially attractive is their medication assisted treatment programs. The use of medication lends itself to the outpatient setting, which resonates well with commercial payers in the market.”

A dozen deals were announced in addiction treatment during Q2. The mental health specialty witnessed nine transactions, a peak of activity that surpassed the last five quarters. Meanwhile, organizations that provide services for autism spectrum disorders and intellectual or developmental disabilities marked 10 deals.

“Deal volume is up, buoyed by the encouragement of greater investment in behavioral health services to meet local demand,” Taggart says. “Trends also indicate that the health system at large will be looking to partner with service providers that have enough scale to deliver comprehensive care.” 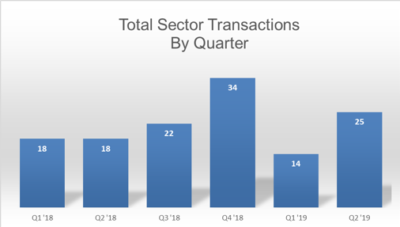 In addition to highlighting the quarterly transactions, Mertz Taggart identifies each subsegment’s recent activity. Many behavioral health deals cross over into more than one subsegment, especially between addiction treatment and mental health, therefore, statistics are not additive.

As more providers seek to build measurable value for payers, patients and communities, organizations are focusing more than ever on comprehensive care, according to Taggart. Substance use disorders and underlying mental health conditions are often treated in tandem, with multidisciplinary providers having the market advantage.

“The need for integrated, comprehensive care is driving the transaction trends,” he says.

In April, Mertz Taggart provided exclusive sell-side advisory services for Recovery Services of New Mexico, an accredited medication-assisted treatment provider. The buyer, BayMark Health Services, gains three traditional opioid treatment programs as a result of the transaction as well as one office-based program that provides buprenorphine, and a program within a county detention center. BayMark operates outpatient centers in 28 states and Canada.

Ohio-based Sunrise, which provides medication assisted treatment in five locations, received partnership investment from Bridges Fund Management in a platform deal in April. The provider’s founder and CEO will retain significant ownership in the business. The addiction treatment subsegment includes a significant number of closely held organizations, and investors often retain founders to manage operations as part of a long-term exit strategy.

In June, Newport Academy announced the purchase of Gray Wolf Ranch in Washington, which is known for its wilderness therapy programs. The combined organization offers young adult treatment centers in four states, specializing in mental health, trauma, eating disorders and substance use disorders. 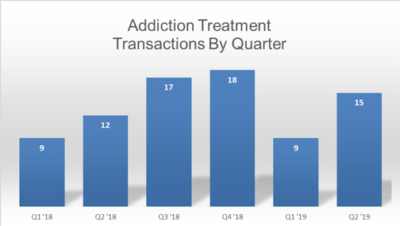 In April, Kadiant Inc. announced two partnerships with Kids Overcoming and Integrated Behavioral Solutions. Those deals were followed in May by definitive agreements to partner with Central Valley Autism Project and STE Consultants. Through Q2, Kadiant has inked four deals. Established in 2019, the organization is a partnership between company CEO Lani Fritts, TPG Capital and Vida Ventures. They likely have their eye on near-term growth strategies.

In May, Burrell Behavioral Health completed a merger with Youth Bridge. The deal allows Burrell to add scale to its new offering of school-based services, which launched in June 2018. The combined organization will serve about 45,000 children and adults. 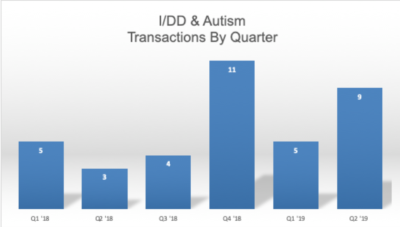 LifeSkills, Inc. and Pennyroyal Center have merged to create the largest behavioral health treatment organization in Kentucky, with 26 service locations. The combined entity will have a total budget of $95 million and will continue to operate with the LifeSkills and Pennyroyal Center brands in their respective markets. Combining operations will offer economies of scale in a geographic area with high need for services.

TCN Behavioral Health Services announced the acquisition of Consolidated Care Inc., with the deal made effective July 1. The combined not-for-profit organization provides mental health and addiction treatment services for children, adolescents and adults. It’s another case of a deal in which the buyer is an established entity looking to increase scale. 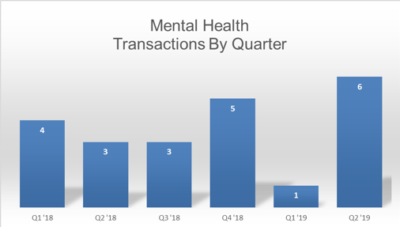