“Hospice made a big jump in the second quarter, which isn’t shocking at all, given the growing demand among home health agencies and some of the newer hospice private-equity backed portfolio companies in the marketplace,” Mertz Taggart Managing Partner Cory Mertz says.

In total, there were at least 25 home health, home care and hospice transactions in Q2 2019. While that total is a clear uptick compared to the 18 deals that happened in the first quarter of 2019, it’s still slightly less than the each of the four quarters of 2018. 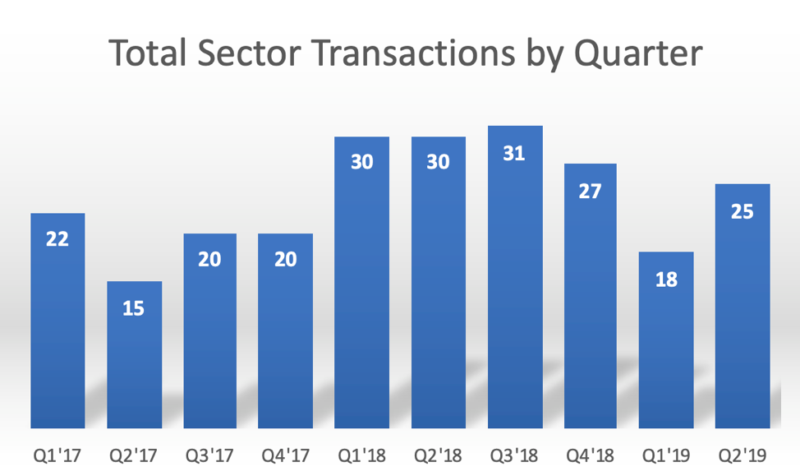 The most active period over the past several quarters remains Q3 2018, which saw at least 31 home health, hospice and home care deals. Note:  Total sector transaction data reported by Mertz Taggart is not equal to the sum of all individual sub-sector deals, as many sub-sector transactions fit into more than one category.

There had been some belief that buyers and sellers would generally pause transaction activity on the home health front. The strong second quarter reinforces the fact that home health care businesses remain winning assets, however.

Mertz predicts that home health M&A figures will stabilize in Q3, then see a possible uptick toward the end of the year.

“Home health rebounded a bit, but should remain fairly soft at least through Q3,” he says. “We may see a bit of a spike in Q4, as operators who foresee Patient-Driven Groupings Model (PDGM) struggles may end up selling — and opportunistic buyers with strong balance sheets acquire tuck-ins in their existing markets.” 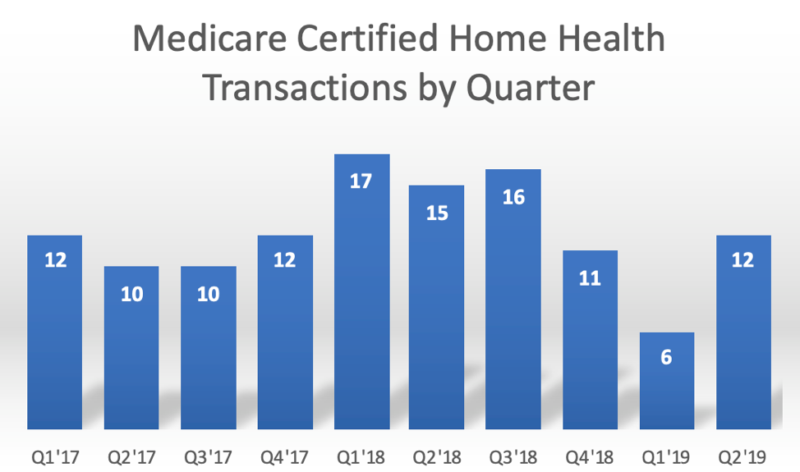 Moving forward, home health transaction trends will also likely be dictated by the final outcome of the Centers for Medicare & Medicaid Services (CMS) proposal to phase out Requests for Anticipated Payments (RAPs) in home health starting next year.

“Of the 12 home health transactions, seven included hospice, which was likely a big driver,” Mertz says. “It’s more challenging to do deals in the lead-up to PDGM simply due to the uncertainty, both at the industry and agency level.  How are operators going to, dare I say, change their behaviors to mitigate the impact?”

Among some of the noteworthy transactions, in May, global private equity firm Advent International announced it had entered into a definitive agreement to acquire post-acute care provider AccentCare from PE-backer Oak Hill Capital Partners. AccentCare — which is typically in M&A news as the acquiring entity — is the sixth-largest home health provider in the U.S., though it also offers a number of other services lines, including hospice.

AccentCare also announced in May it had purchased three health care businesses in Florida.

Apart from AccentCare, Varsity Healthcare Partners — a lower middle-market private equity firm focused on health care services — announced the completion of a growth equity investment in Angels of Care in April. Angels of Care is a rapidly growing provider of home health services to pediatric patients with complex medical conditions that operates in Texas and Colorado.

Overall, the number of home care-related transactions checked in at seven during the second quarter of 2019; there were six total in the previous quarter. Both figures are sharp decreases compared to Q1 and Q2 of 2018 when there were 10 and 15 home care transactions, respectively.

“Home care is still very attractive, but there have been very few assets that have come to market,” Mertz says.

National Association for Home Care & Hospice President William A. Dombi recently echoed those claims as well during the organizations Financial Management Conference in Chicago. The industry leader said home care is lined up for “endless growth” in years to come, though “it’s difficult to get your arms around in terms of understanding exactly trend-wise.” 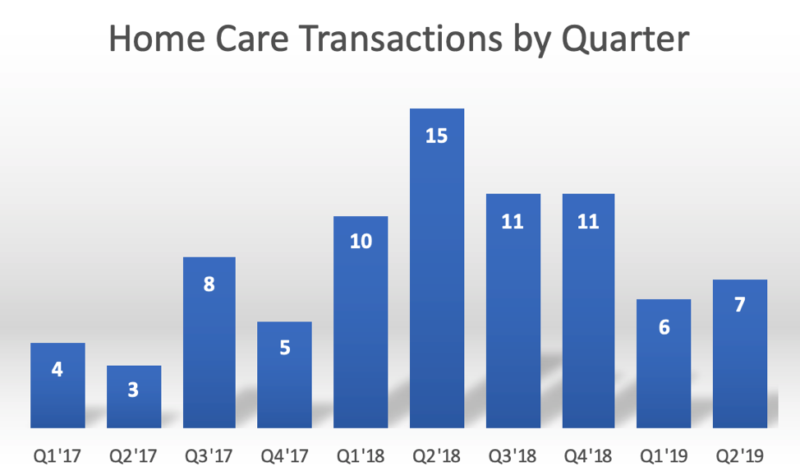 Noteworthy home care deals in the quarter included Arosa+LivHome’s acquisition of Forever Young Home Care in May. Arosa+LivHome — backed by Bain Capital Double Impact — plans to use the deal to add scale to its operations in North Carolina.

Arosa+LivHome currently operates in more than a dozen markets across California, North Carolina, Illinois and Texas.

When it comes to hospice, there were at least 14 related transactions in Q2 2019, an increase over the eight hospice-related deals that took place in the first quarter. A year ago, there were seven hospice deals in Q1 and eight in Q2.

Hospice will remain a hot space for the foreseeable future, though CMS did rebase payment rates for the four levels of hospice care in its Fiscal Year 2020 final rule. Overall, the final rule calls for a 2.7% cut in routine home care payments, with a corresponding 2.7% increase in payments for continuous home care, general in-patient care and in-patient respite care. 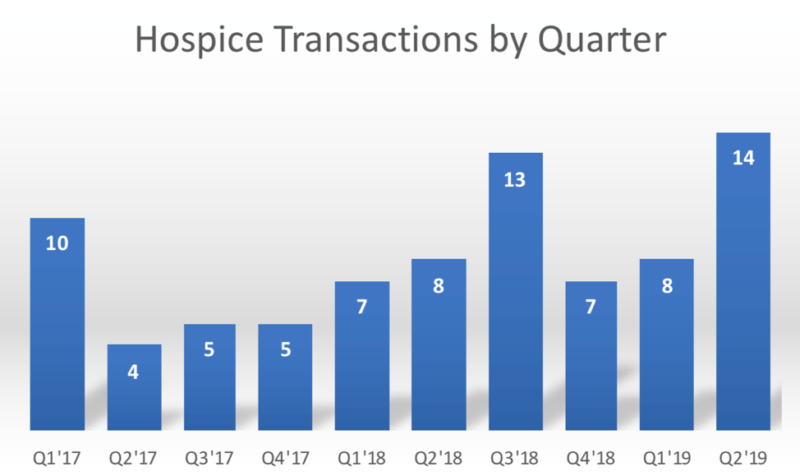