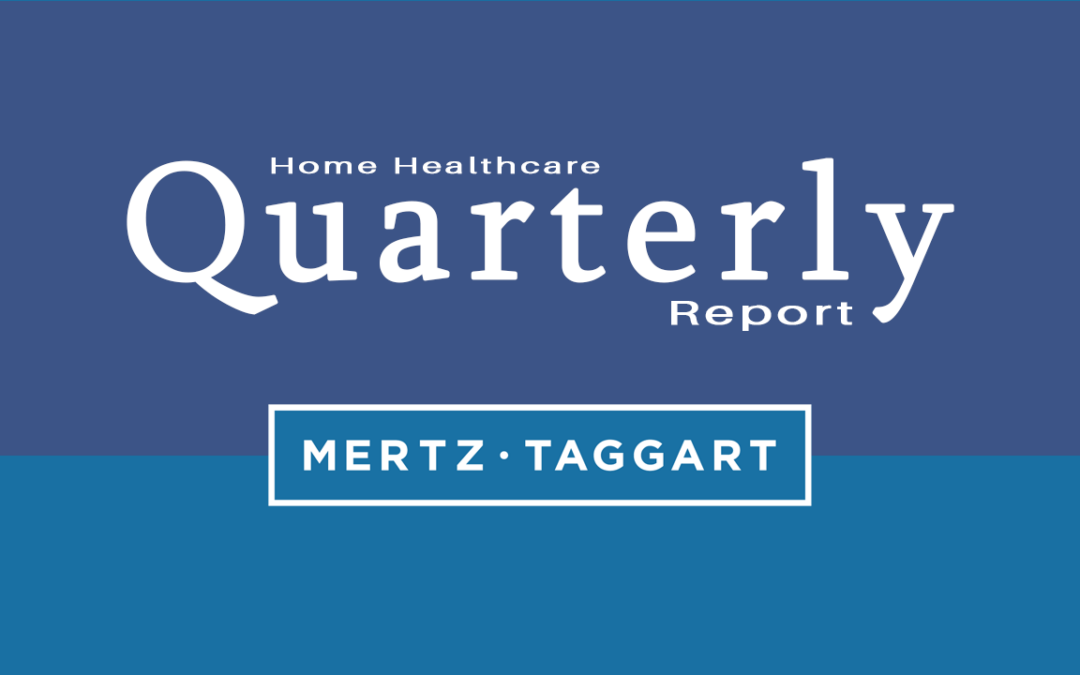 As expected, the first quarter of 2019 saw a slight dip in home health, hospice and home care dealmaking activity, the latest data from M&A advisory firm Mertz Taggart show. The drop in total transactions is largely tied to the home health space specifically, though home care deals were also down by a nominal level on a quarterly basis.

Overall, there were 18 home health, hospice and home care transactions in Q1 2019—down substantially on an annual basis from the 30 total deals from the same period a year prior and nine fewer than Q4 2018.

“There are a few reasons why volume is down in Q1,” Mertz Taggart Managing Partner Cory Mertz says. “In home health, for example, there’s the Patient-Driven Groupings Model (PDGM). In home care, there hasn’t been an abundance of quality assets for buyers to sink their teeth into.”

For context, the most active quarter in the past few years was Q3 2018, which saw at least 31 home health, hospice, and home care deals. The least active: Q2 2017, which saw just 15 total transactions.

Among the notable deals that either closed or were announced during the first quarter of 2019:

In January, HouseWorks LLC acquired Caring Friends Home Care. As a result of the move, HouseWorks expanded into the Philadelphia market.

In February, Aveanna Healthcare entered into a definitive agreement to acquire the home health division of Maxim Healthcare Services. Backed by Bain Capital and J.H. Whitney, Aveanna is made up of two of the largest providers of pediatric home care in the country.

Also in February, Amedisys closed on a $340 million acquisition of Compassionate Care Hospice. The deal makes Amedisys the third-largest hospice provider in the United States.

In March, KKR and an affiliate of Walgreens Boots Alliance Inc. closed on a $1.32 billion acquisition of BrightSpring Health Services and subsequent merger with PharMerica. The merger gives BrightSpring a unique business model for managing complex medication regimens and monitoring adherence in the home setting.

Also in the first quarter, LHC Group announced joint venture relationships with Unity Health and Geisinger Home Health and Hospice. Both JV announcements are part of LHC Group’s overarching strategy of teaming up with hospitals and health systems.

In addition to highlighting the total number of home health, hospice and home care transactions on a quarterly basis, Mertz Taggart also breaks down dealmaking by segment. Statistics are not additive, however, as one transaction can be related to both home health and hospice simultaneously.

It’s not a surprise that home health transactions have dipped, as buyers and sellers alike are trying to learn how to navigate PDGM’s uncharted waters.

PDGM also poses the threat of a 6.42% payment cut based on certain “behavioral assumptions.”

Despite the uncertainty that comes with a new payment model, there are still deals likely on the horizon, Mertz says. Home health providers looking to sell need to spend time identifying best-fit buyers, taking into consideration size, geography and payer mix.

Meanwhile, hospice is still hot when it comes to M&A.

“We continue to see strength in the segment,” Mertz says. “And multiples are still very strong.”

In April, the U.S. Centers for Medicare & Medicaid Services (CMS) announced in its proposed rule that it intends to raise hospice payment rates for certain levels of care by 2.7% in 2020. The proposed rule affects routine home care, in-patient care and in-patient respite care. To support the broader increase, CMS plans to specifically cut routine home care by a corresponding  2.7%.

The proposed rule is a $540 million raise in hospice payments for FY 2020 overall.

Home care dealmaking is primed for an upswing, as in-home care is being more widely seen as a cost-effective way to monitor and manage patients, preventing unnecessary emergency room visits and potential re-hospitalizations.