Skip to content
PDGM: Home Health M&A Impact — and the Value of Your Agency

PDGM: Home Health M&A Impact — and the Value of Your Agency

The Patient-Driven Groupings Model (PDGM) — set for a Jan. 1, 2020 implementation date — is the most significant change the home health industry has seen since the current Prospective Payment System (PPS) was put in place nearly two decades ago.

While the payment overhaul is sure to affect how and when home health providers are reimbursed, it’s also certain to have a powerful impact on mergers and acquisitions over the next 12 months. Arguably, that impact may have already arrived.

Since Q1 2017, each quarter has seen double-digit transaction totals for Medicare-certified home health providers, spiking at 17 deals in Q1 2018. During the first quarter of 2019, however, there were only a handful of transactions completed, perhaps suggesting potential hesitancy among both buyers and sellers. 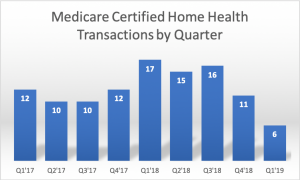 As home health deals have slowed, M&A activity in the hospice sector has remained robust, however. Home care dealmaking has also held steady.

Among its changes, PDGM halves the traditional 60-day unit of payment to 30 days, requiring home health agencies to streamline their referrals, intake and billing processes. Additionally, the overhaul makes patient classification more complex, as the model comes with 432 case-mix groups, each with varying levels of reimbursement.

PDGM’s biggest red flag: a potential 6.42% payment cut based on certain “behavioral adjustments,” or assumptions that the Centers for Medicare & Medicaid Services (CMS) has made related to coding, Low Utilization Payment Adjustment (LUPA) claims and other factors.

The Washington, D.C.-based National Association for Home Care & Hospice (NAHC) and other industry stakeholders have rallied against PDGM’s behavioral adjustment provisions. So far, efforts have even included recently introduced bills in both the House and Senate aimed at eliminating or modifying them altogether.

“From the Medicare home health advocacy perspective, this is issue No. 1 for us,” NAHC President William A. Dombi said during a January interview with Home Health Care News. “The 6.42% in the proposed rule was not finalized by CMS. Instead, CMS finalized they would be doing behavioral adjustment using factors such as upcoding on diagnosis, adding visits to avoid LUPA thresholds that are in the model.”

At the risk of oversimplifying, take, for example, the value of two identical agencies, the second of which encounters a flat, 6.42% cut to reimbursement.

Both generate $10 million in revenue and have $8.5 million in expenses:

And, consequently, a 43% reduction in value (at any given multiple)

“In general, uncertainty can create a challenging transaction environment,” according to Mertz. “Buyers tend to be conservative unless compelled to get aggressive, while sellers want to assume the best result.

“If you’re looking to do a transaction, it will be important to confidentially market to multiple strategic buyers. While all buyers will want to look at the current PDGM models for the agency, including the potential 6.42% rate cut, those buyers with the strongest strategic interest will be willing to spend the time to look beyond those models and how the agency will likely perform in the new environment.”

Despite the uncertainty, there are opportunities, according to Mertz. But home health providers looking to sell need to identify the right buyer at the right time, taking into consideration their size, geography and payer mix.

Moreover, while buyers may be conservative, those of the private equity variety aren’t going to lose interest in the home health space any time soon. PE groups are sitting on a record amount of buying power, with ample cash available to pursue transactions.

Overall, there were 33 add-on and 22 platform transactions from PE firms in the home health, home care and hospice spaces in 2018, Mertz Taggart research shows.

Historically, M&A activity has often increased in the midst of industry-shaping change as well, with smaller mom-and-pop providers looking for exits rather than staying put and adapting to a new payment landscape. After PDGM becomes a reality, this trend may persevere.

One interesting prediction: therapy-heavy home health providers may be the most active when it comes to M&A, as PDGM eliminates the use of therapy thresholds as a determining factor in payment. Telehealth has been cited as a solution to upcoming therapy changes — and PE firms may be able to provide the needed capital for providers to roll out new technologies.